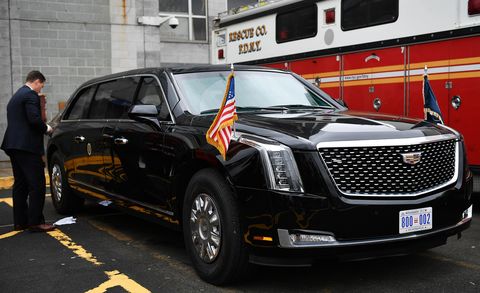 UPDATE, 1/20/2021: The presidential Cadillac limousine known as “The Beast” is changing hands as of noon today, when Joe Biden is sworn in as the 46th president. The story below describes the heavily armored limousine at the time of its first use with outgoing President Trump, in 2018. Because there will be no official parade marking the inauguration, it’s unlikely we will get a look at “The Beast” up close today.

From 2018: President Donald Trump has officially arrived at a public event where he debuted his new presidential limo—”The Beast,” as it’s known colloquially. Like the previous Beast, first used by President Barack Obama in 2009, the new version is built by General Motors and visually denoted as a Cadillac, and its latest iteration adopts more modern styling cues and surely packs more advanced technology.

Although the details are kept secret, the new Beast is, like its predecessor, a heavily armored stretch limousine that, despite looking like a stretched CT6 or XTS sedan, is actually built on a heavy-duty GMC TopKick truck platform and supposedly weighs upward of 15,000 pounds. Its somewhat conventional styling attempts to mask the sedan’s imposing footprint, but in reality it is far larger than any full-size truck or SUV on the road today. We don’t know what is under the hood, but it’s surely a stout powertrain to be able to move around something so massive.

The headlights appear lifted from a Cadillac Escalade SUV, the new grille is emblematic of Cadillac’s latest design direction as introduced on the Escala concept, and the car’s proportions are considerably more attractive than the previous, somewhat Frankenstein-like Beast. We can assume that the interior gets a considerable upgrade as well, although civilians shouldn’t expect to see the reported seven-seat layout anytime soon.

The new Beast’s first appearance was during Trump’s visit to New York City to attend the United Nations General Assembly. The president landed in the Marine One helicopter in lower Manhattan, where the Beast picked him up and was spotted driving around as part of a large motorcade. We should continue to see the new Beast in service wherever Trump goes; there are several copies of the Beast—reports differ on how many exist—and they are transported by cargo plane to join the president wherever he travels around the globe.

This content is created and maintained by a third party, and imported onto this page to help users provide their email addresses. You may be able to find more information about this and similar content at piano.io

What We Know So Far