At the time of writing this, your friendly English correspondent is driving what on the face of it is a Fiat Cinquecento city car (aka the 500), but this is no ordinary diminutive Italian runaround. The front and rear badges proudly declare this to be an Abarth. The mainstream name of Fiat does not appear anywhere because an Abarth is something different entirely.

In 1949 an Italian-Austrian fellow named Carlo Abarth founded the eponymous racing and road car brand, its logo being a shield with a stylized scorpion on a yellow and red background hinting at the intention. Old Carlo sold out to the major Italian brand in 1971 and the Abarth name is now attached to an independent unit within the Fiat organisation. The brief: take the standard car and breathe upon it with fire and brimstone.

The version this writer is driving is the 595 Turismo, a hot hatchback that offers a whole heap of fun, all the while oozing character and that quintessentially Italian charm. It costs around $24,000 in the UK and is worth every hard-earned penny. The 595 in this case is powered by a 1.4 liter turbo-jet petrol engine developing 165 bhp. That’s plenty for a car that weights about the same as Sandra Bullock. I don’t know why I thought of Sandra Bullock at this point. Maybe it’s just me. Reese Witherspoon then; whatever: this car is light despite the addition of over-sized 17-inch Gran Turismo alloy wheels.

The base model offers a still healthy 145 bhp whilst the top edition gets 180 bhp and some performance upgrades, including a trick exhaust that makes the little car sound like an Atlas rocket. Top speed is 135 mph, but we didn’t try it because the sound of this motor at full chat is hardly shy and retiring, attracting attention even in the subtle ‘Record Grey’ as seen here. Ideally it should be red or yellow.

Feels Faster Than It Looks

The 595 as tested will attain the European benchmark of 62 mph (100 km/h) in 7.3 seconds, which is in fact a bit slower than the Ford Fiesta I mention below, but it feels fast probably due to the fact it’s so small. The trunk isn’t all bad considering the car’s overall dimensions; certainly enough room for a weekend’s luggage. The down side is that the rear seat space is cramped. The 595 is a two-door vehicle which means rear seat passengers have to enter and leave in the manner of Harry Houdini. It is cramped in there; children only I guess. Anyone over say six feet tall may never emerge at all unless they clamber out of the big rear hatch like an escaping victim. Driving The 595 Versus The Fiesta ST

In the past My Lady has made it clear that she does not like small, hot cars. Previously she has spurned them; she repudiated them and thus accompanied yours truly on test drives with enormous reluctance. A few weeks ago, however, we trialled Ford’s feisty Fiesta ST (seen below in red), whipping through Summer lanes and she loved it. That’s how good Ford made the car and it is almost the same with the 595.

We drove the 595 to Nightingale Woods in deepest Wiltshire for a run out and to take the images seen here. I was badly bitten by a horsefly, not that you care. Needless to say, we completely forgot about the access road which has more potholes than the moon or, worse still, the road outside my house. Quickly, the occupants become aware that the suspension is seemingly made from iron, stripped from old decommissioned battleships. Stay on the black-top if you value your spine.

On the road it was as if we were somehow inside a well-controlled ice hockey puck, streaking forward only to suddenly change trajectory as skilled hands applied the next input. Wow.

The diminutive turbo-engine really spools up over 3000 rpm which is where you need to be to squeeze out the maximum from the motor. There’s even a little turbo gauge like a mouse’s ear atop the dashboard if that sort of thing is of interest. Personally, driving the thing is so much fun and such a handful that it’s doubtful this driver even glanced at it. 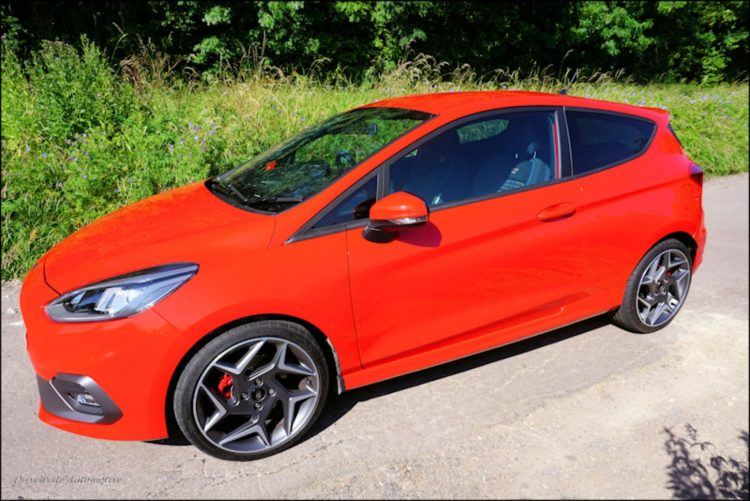 Sick With The Stick

Our test vehicle had the option of Normal and Sport modes. This can be changed on the fly so it makes sense to save a bit of fuel in traffic or on long motorway stints but otherwise the car really wants the Sport mode as default. It’s stick-shift and five gears unless the buyer opts for the ‘robotized’ sequential five-speed auto; it’s expensive though. Stick with the stick.

It’s a front-wheel drive car, but it gets around the understeer issue with a device called Torque Transfer Control as standard on all variants. It works by automatically braking the inside wheel and using it as a pivot point when accelerating through a corner, tightening the car’s line which allows the pilot to carry more speed through the curves. It works very well, giving this driver confidence to push the 595 that little bit more. Would I Buy One?

Yes, like a shot if I had an abundance of money and thus be able to have a small stable of lively vehicles to play with. Sadly, I am but a humble scribe; that impoverished writer you see pressing his face up against the plate glass window of the expensive restaurant as nightly you dine finely. So no; I wouldn’t. The 595 is very niche and day-to-day would be wearing to drive. The Ford Fiesta would be my choice. That said, the Abarth 595 retains the charm and looks of the original Cinquecento, yet still manages to add genuine performance. Characterful and fun.

2022 Mercedes EQS Electric Luxury Sedan to Be Unveiled in Spring

The 2022 BMW 4-Series Gran Coupe is the second-generation model of the German automaker’s 4-Series hatchback. Right off the bat,

You Won’t Believe This Lamborghini Sián Made Entirely From LEGOs!