The verdict: The 2020 Mercedes-AMG GT C Roadster is striking to behold and even better to drive. It’s a true sports car, for better or worse — but mostly for the better.

Versus the competition: You can find other sports cars with similarly impressive performance (for similarly staggering amounts of money), but the AMG GT C Roadster’s design — long hood, rearward-set cockpit and short rear deck — sets it apart from much of the competition.

The base GT Coupe starts at $116,895 (including a $995 destination charge), but the mid-level GT C Coupe is considerably more expensive, at $151,895; choosing the convertible version raises the price to $163,395. Our test car’s $179,795 as-tested price was higher still due to a $1,000 gas-guzzler tax and optional features like matte-blue paint, a carbon-fiber engine cover, adaptive cruise control and a Burmester premium stereo.

Just getting into the GT C reminds you it’s built to perform. The seating position is incredibly low, making stepping in and out an inelegant affair, and the bucket seats are stiff and highly bolstered. The seats include power-adjustable side bolsters for a tailored fit I appreciated in fast corners. After a few hours of driving, though, the firmness of the seat caught up with me in the form of a sore back. That hasn’t happened in a long time.

Mercedes has done a masterful job tuning the GT C’s chassis. The steering is direct and responsive, with an appropriate heft to the steering wheel, and the car’s low center of gravity helps it shine in corners; it just sticks and exhibits very little body roll. Take it out on your favorite winding road and have a ball. 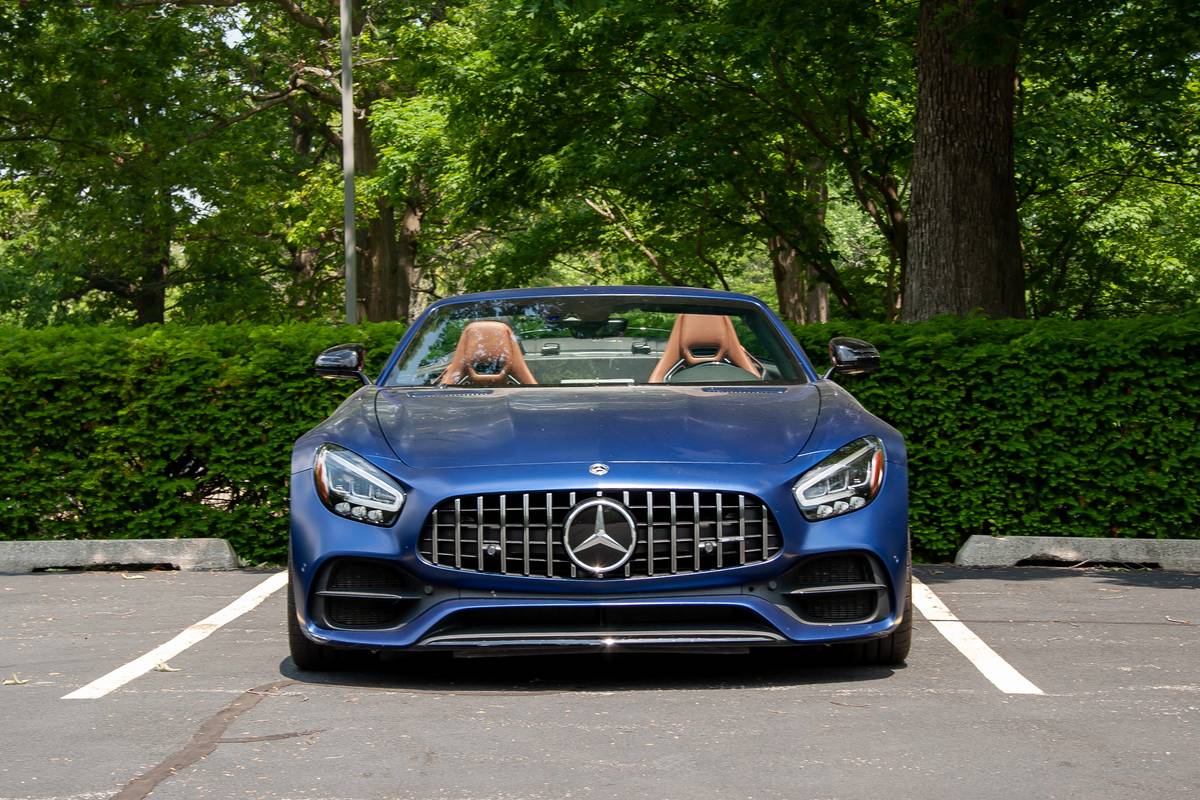 The adaptive suspension that helps the car perform so well in corners, however, is a bit of a liability back in the world of stop-and-go suburban traffic. Even in its softest Comfort setting, the suspension is firm and unforgiving, transmitting even small bumps and breaks in the pavement. The suspension also includes Sport and Sport Plus settings, but the difference between the three modes isn’t dramatic; softer tuning for the Comfort mode would make the GT C more livable in everyday driving.

What doesn’t need any work is the GT C’s twin-turbocharged 4.0-liter V-8 engine and seven-speed dual-clutch automatic transmission. The two are a potent pair: Mercedes reports a 3.6-second 0-60 mph time for the roadster. Acceleration is effortless, with more power at your disposal than you could ever legally use on a public road. The brakes are equally impressive at shedding speed, and the firm, linear brake pedal inspires confidence.

Despite the incredible amount of power under the hood, the GT C is fairly docile in everyday driving. Gas pedal response is gradual in the Comfort drive mode, and the transmission makes smooth, unobtrusive shifts. If you decide to take control using the shift paddles on the steering wheel, you’re rewarded with quick gear changes.

The convertible version of the GT C comes with a three-layer power-folding soft top with a glass rear window. The top is quick — it takes only about 13 seconds to lower or raise it — and it operates at speeds up to 31 mph.

However, the soft top severely restricts over-shoulder visibility when it’s up, especially over your left shoulder; I had to lean forward to look around the top when checking my blind spot. In certain situations, the windshield frame can block your view of overhead stoplights, forcing you to duck to see if the light’s turned green. Rear visibility isn’t great, either, regardless of whether the top is up or down; the backup camera is a necessity. 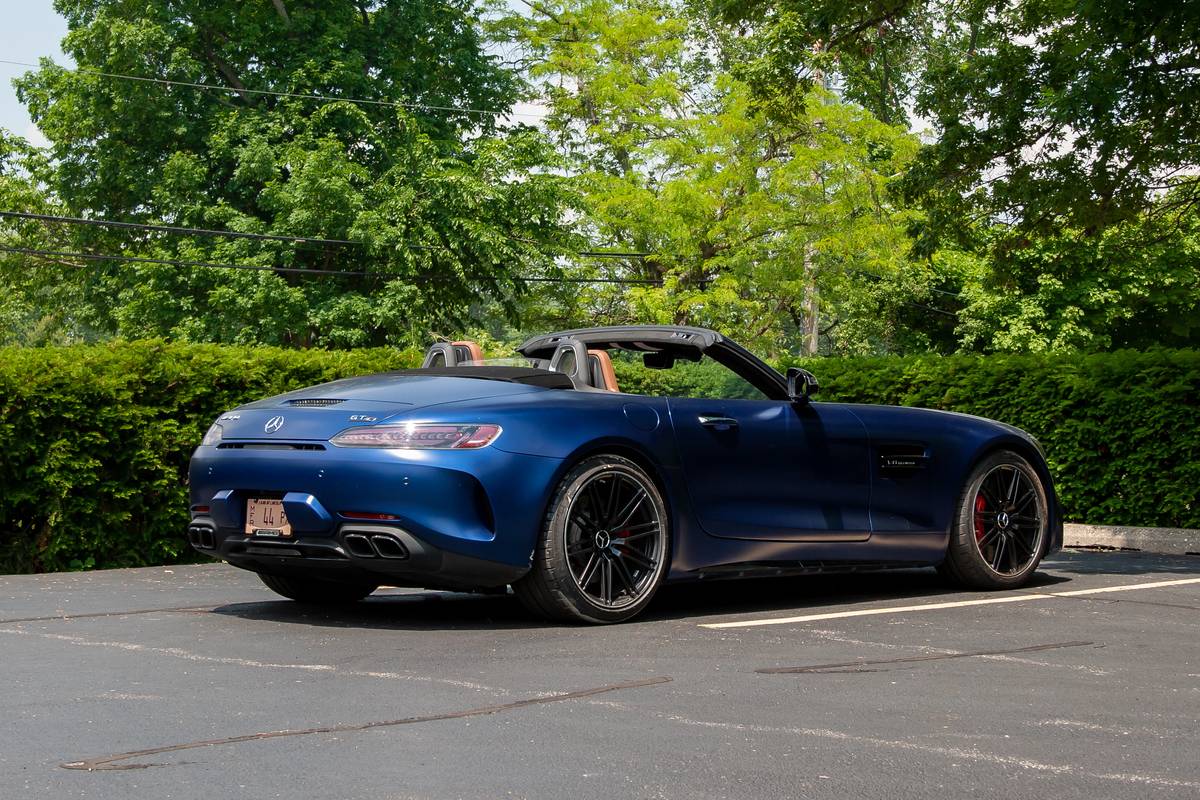 Even though the top has three layers of material, a lot of road noise finds its way into the cabin at highway speeds. With the top down, however, cabin turbulence is minimal even while driving fast. The roadster includes a small glass wind deflector between the seatbacks.

The roadster’s 5.8-cubic-foot trunk isn’t affected by the lowered top, which stows in its own compartment. Even so, there’s not a lot of room for luggage.

The rich interior quality Mercedes is known for is present in the GT C. The cabin — including the dashboard — is finished in Nappa leather, and most of the controls and surfaces have a premium appearance and feel. The drive mode and suspension controls on the steering wheel, however, feel a bit flimsy.

The driver and passenger are separated by a massive center console, but despite its bulk, it doesn’t offer much storage space; there’s just a shallow bin under the center armrest. The center console also includes a series of touch-sensitive controls, each with its own tiny display screen. The controls give the console a clean, tech-focused appearance, but the small screens are hard to see in direct sunlight. A 12.3-inch configurable digital instrument panel is standard. 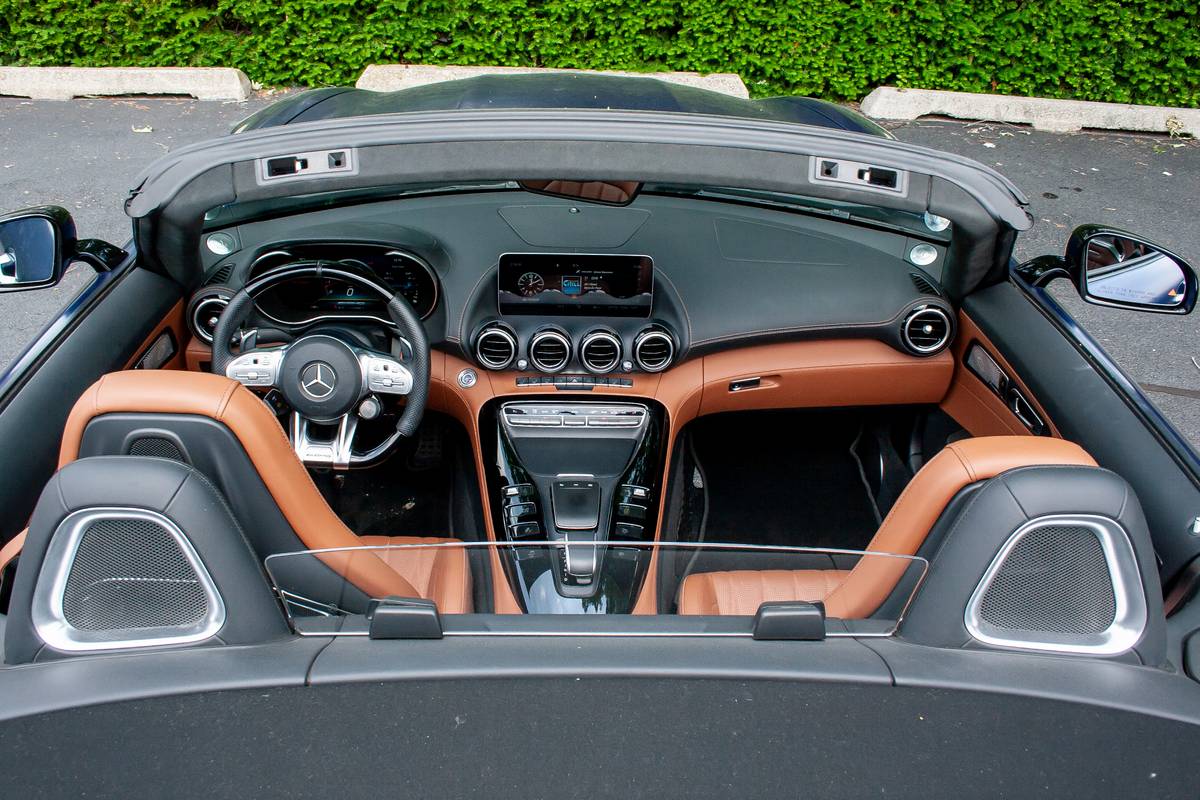 The multimedia system includes a 10.25-inch dashboard screen and a console touchpad controller. It’s easy enough to use the touchpad to navigate the system’s various onscreen menus, swiping and depressing the touchpad as needed, but a supplementary tuning knob would be nice to have.

The multimedia system supports Apple CarPlay and Android Auto smartphone connectivity. CarPlay started immediately when I connected my iPhone, and it uses the full width of the dashboard screen. The graphics are crisp and the CarPlay interface looks great, but the lack of a touchscreen means you have to use the console touchpad to select different apps. Given CarPlay is optimized for touchscreens, it’s not ideal.

Value in Its Class

The Mercedes-AMG GT C is an elegant luxury car that could probably get by on looks alone, but spending just a few minutes behind the wheel reveals how much more it is than just a stylish roadster. It’s all the more impressive when you consider the brand that builds it is mostly known for making comfortable, stately luxury cars. The GT C has enough luxury and tech features to not seem out of place alongside its Mercedes siblings, but its focus is driving performance, and in this it’s a thrilling success.

Is a Crash Ever an Accident?

How it Works & How it Compares to Similar Systems

Ford will begin offering its new BlueCruise hands-free highway driving system later in 2021. Via over-the-air software updates, the feature will be

A New Godzilla Is Coming!